I'm moving out friends... to a better, bigger and brighter website. From thoughtsofartisan.blogspot.com.. to... designsofartisan.com. Definitely with a different look and feel and with more inspiring posts.
Wow... I can't believe that I was able to do this... it was a 2-year wish lists and now I can finally put a check mark on that. {A pat on the back for me!} Although, please be kind and bare with my site. It's not perfectly done yet, since it's my first time to make my own site. Second to be exact, this is my very first site project, Green Tomato Weddings. But I'm trying to customized it little by little... please be patient if you see some errors.
I had a wonderful experience with Blogger. This is where I started and I found the love for blogging. I had a little battle within me whether to move this or not. However, I've thought of expanding and thinking of designing websites as well. That's why moving out to Wordpress would be a very practical reason.
I feel a little sad, I don't know why, but somehow I know change is good. And I'm looking for a greener pasture. I hope you'll still be with me as I move along my site. I'll be bringing some of my posts in the site like the Wedding 101 and etc. But most of the archives here will still remain.
See you in my new site... designsofartisan.com
at Tuesday, July 19, 2011 2 comments:

Email ThisBlogThis!Share to TwitterShare to FacebookShare to Pinterest
Labels: happenings

It's a wedding month

They used to call it June Bride. But I heard a lot of bridal fairs for this month. So, I guess, July is the new June, LOL.

Anyway, my blog has not been updated frequently as much as I wanted to. And seriously, they are a lot of things going on in the studio. Hence, the highlight would be this coming July 8, 2011 because Artisan Design Studio is celebrating its 2nd year anniversary. And OMG, 2 years in this field and I have not prepared anything for my readers, clients and even for my staffs. As in totally no plans for now. Somehow, it's giving me a little tingling feeling of panic, haha. But on the other hand, I work best under pressure, hopefully {crossing my fingers}.

Apparently, this week had been such a frantic in the studio. Non-stop of printing, cutting and glueing. On top of that, we will joining a bridal fair held by Pearl Farm Beach Resort at their Marina this coming July 9. That's another thing that I'm preparing for. Which I'm quite excited {but still unprepared until today} because I'll be doing a different set-up this time. 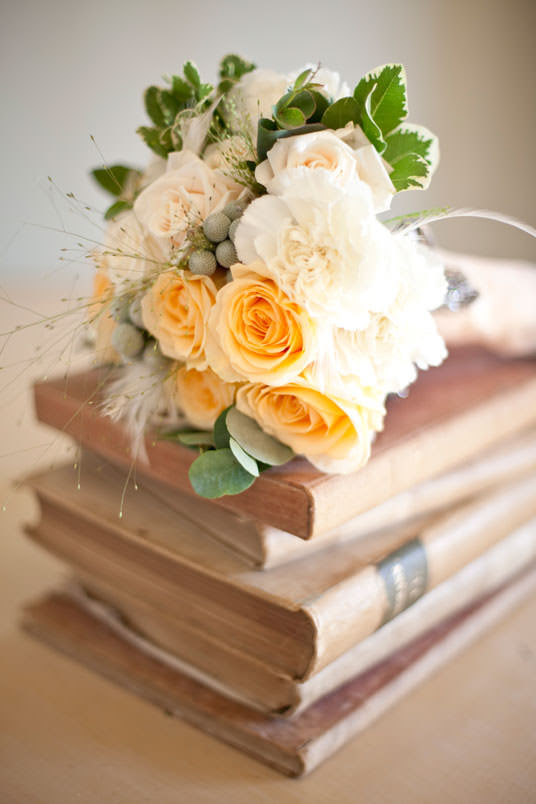 Photo from Brosnan Photographic
Anyway, since we will be celebrating July Bride and it's our anniversary month, I'll be posting about Wedding 101, as a gratitude to our beloved clients and readers for the 2 years of creating my dreams into a reality.


Keep coming back specially if your still planning your wedding, and of course a giveaway for our anniversary. See you again this week... =)
at Wednesday, July 06, 2011 No comments:

Email ThisBlogThis!Share to TwitterShare to FacebookShare to Pinterest
Labels: happenings

Snail mail never fails to put a smile on my face... and when one of my daily blog reads, Creative Collection, organized a swap like this, when I read about it, can you imagine how big my smile was?
Anyway, I just thought, I'd share what I sent to my 3 partners. I prepared some paper goodies like postcard, gift tags with twines and book plates, all handmade from my Etsy store. Then I wrapped it with doily and a ribbon. 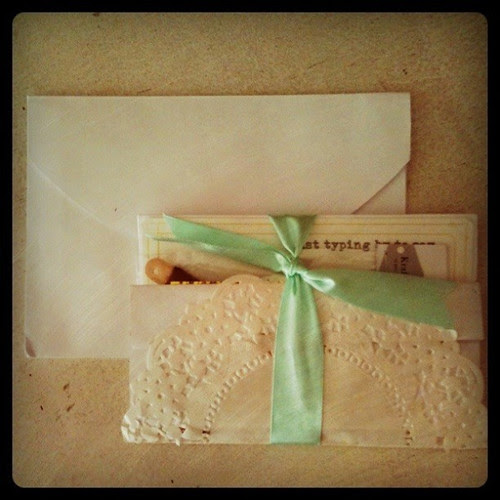 I really hope that this parcel will make my partners smile like how I feel every time I received one.
at Thursday, June 30, 2011 4 comments:

I have to admit... it's really hard to write something for someone you know. I don't know if you feel the same way, but I feel conscious about it. Thinking they might read it and what they may think about what you write. Good thing, I am not a journalist or a profesional writer.

Anyway, a friend since high-school named Noche referred his brother, Leewee and fiancé, Judy to my little studio for their wedding invitation. The theme was garden or zen but they wanted to have a formal feel for their invites. I truly feel honor to design this for them. And speaking of honor, this couple are actually lawyers. Cool huh?!

The invitation was a folded envelope with a pocket inside for the other cards. The main card was attached to the envelope and the Principal Sponsors and Entourage, with a small R.S.V.P. card were inserted in the pocket.

This was my first draft. Printed envelope and 3 separate cards with a monogram seal. 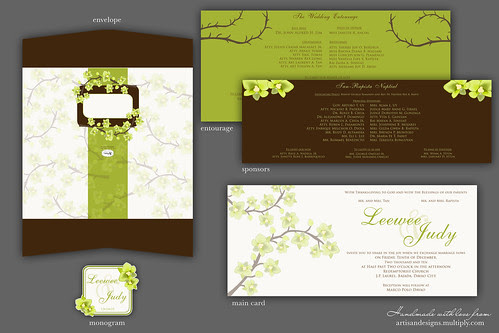 This is the look of the envelope, front and back... 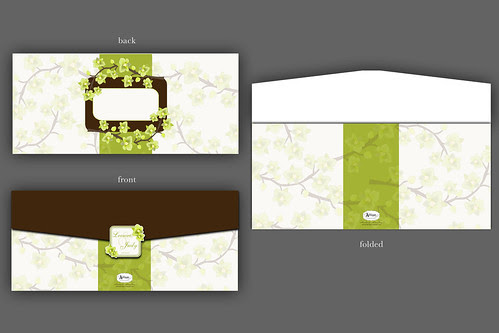 And the overall look of the invitation. Zen theme with moss green and brown for the motif. 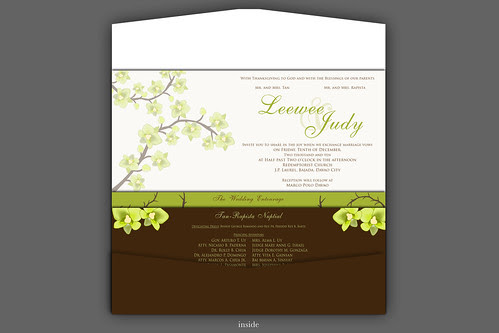 However, the bride wanted a simplier style. So we removed the design of the envelope except for the brown flap and changed it to gold metallic instead. The illusion of the belt on the first draft wast retained, but with a real attachment already with monogram seal and guest's box as one. 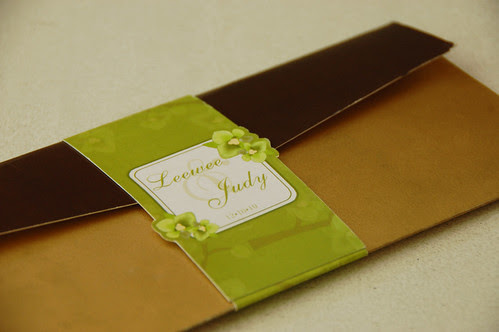 Inside look and the belt. 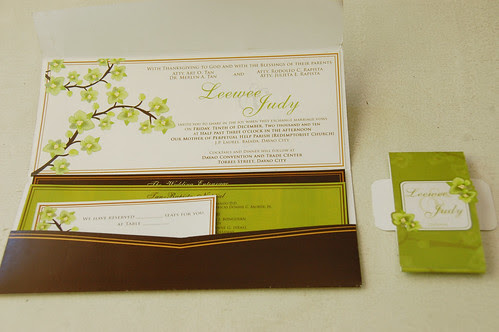 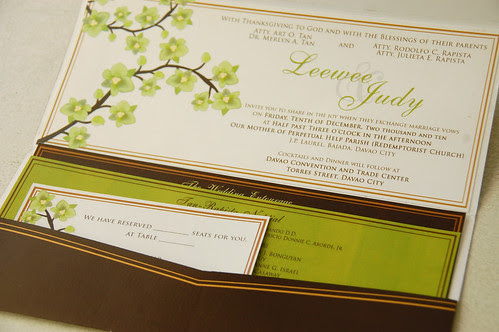 We also added white rhinestone on the florals {unfortunately, not shown in the photo}. The belt on the other hand was my favorite. I think it gave a unique feel rather than using the usual monogram seal. What do you think?
at Friday, June 24, 2011 3 comments:

Email ThisBlogThis!Share to TwitterShare to FacebookShare to Pinterest
Labels: wedding

Black and White is classic

I normally design cute themes for the Debut invitations, such as: fairies, angels, butterflies or simply colored motifs. But this time, it's different! A classic design for a young lady.

Who would have thought, this young beautiful lady named Miranda wanted her debut to be classic. A black and white theme... simple yet elegant is what I can describe about the design I made for her. See for yourself... 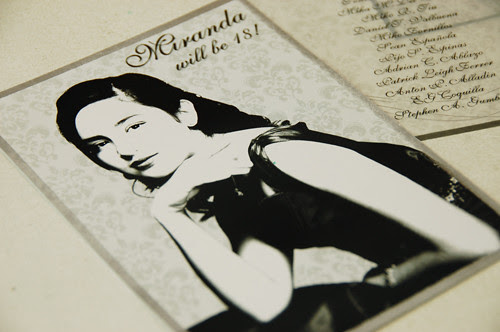 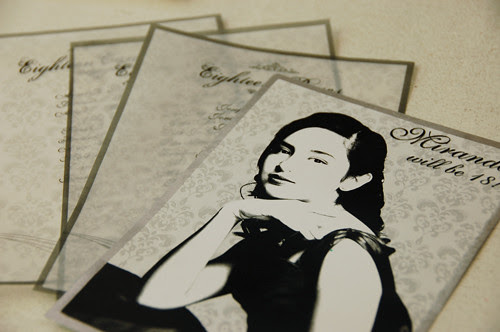 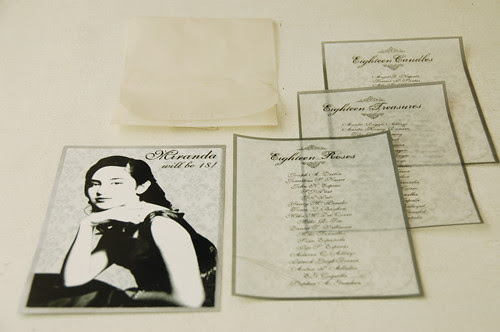 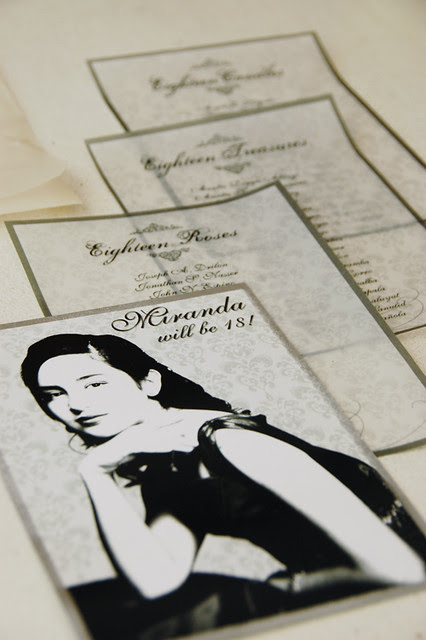 The invitation consists of 4 cards with 5x7-inch size. The main card is printed on a #220gsm glossy paper with metallic silver on all corners. Her photo was at the front and the event details was the back. The other 3 cards were the 18 roses, candles and treasures, printed on a parchment paper to give a silhouet feel. The envelope was also a parchment paper.
It may be an unusual theme, but somehow, it stands out from our portfolio. Since it's classic and different.
at Sunday, June 19, 2011 2 comments:

iam_artisan
Philippines
Hello! My name is April. I want to believe I'm an artist in my own little way and you are about to read all about my stuff, what we do in the studio, my inspirations, and my usual everyday routine... an artisan life... =)

ar•ti•san (noun)
a worker in a skilled trade especially one that involves making things by hand.

Promote Your Page Too

Thank you for following

Thank you for dropping by